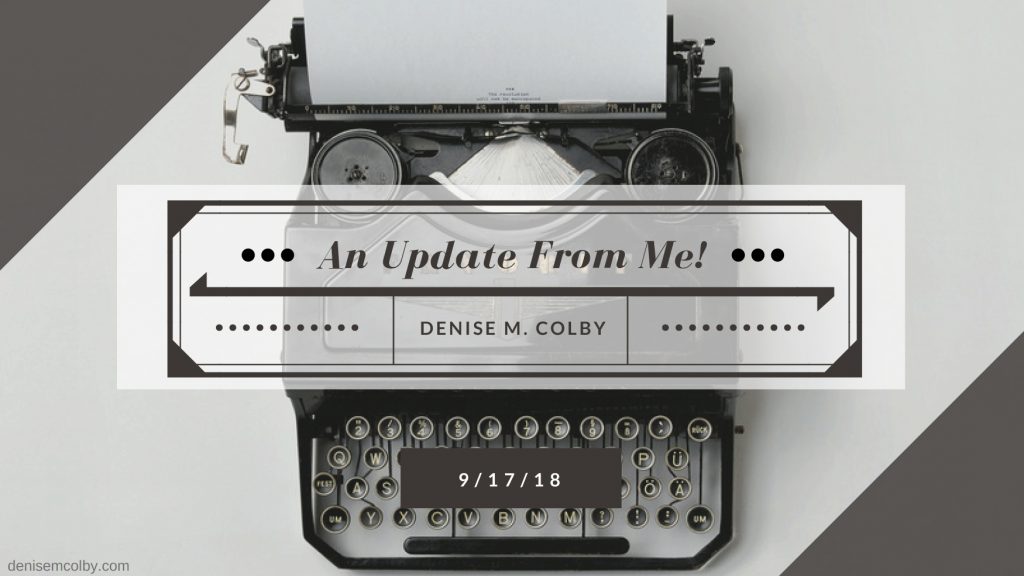 It’s been a while since I’ve written for my own blog.

Life is always busy in my household with three teenage boys and all their activities so I’ve been focusing on more simpler posts such as the First Line Fridays and on writing magazine articles and a monthly blog over at A Slice of Orange.

I jumped into the First Line Fridays scene at the beginning of the year and enjoyed sharing and commenting on all sorts of books—some old favorites and some new here on my blog. You can check them all out here or the latest one here.

I was looking forward to the summer

and hopefully a slower schedule with more time to write, but that didn’t happen.  I started the summer with a wonderful conference.  SoCal Christian Writers Conference was held June 21-23 at Biola University and it was wonderful to learn and be filled with encouragement and writing ideas.  I came back with a long list of things I wanted to do to pursue this writing career.  And then the week I got back I got a call about my mom not doing well and left to go spend an unknown amount of time with her and my sisters.

When my mother passed away in early July, I found it challenging to sit still and write.

So even though I met my obligations to others (magazine articles and blog post), I took a break mentally from my own expectations. It was a good move for me to regroup and give myself some grace. And my list from the conference has sat there waiting patiently for me to get back to it.

But even during all that time off, ideas kept brewing in my mind.

It seems a writers mind never stops working….oh the joys of being a writer.

So now, the kids are back in school. We had a beautiful Celebration of Life for my mom over labor day weekend and I’ve gotten a handle on the laundry and the cleaning (for now). So I’m working on my routine again.

So here’s an update:

I’m editing my novel. Still. The main draft is done, but learning about all the layers that go into a novel – plot, grammar, correct point of view, balance between dialogue, narration, and action. That takes time. For me…since it’s in between being a wife, mom and daughter as well as any outside paid jobs…it’s taken a lot of time.

But I feel like it’s been worth the time. All the online classes and monthly workshops, I believe it has been good to not rush through the editing process. I have learned much and am excited to put all that learning into practice. I’m excited to be moving forward again.

I appreciate all the support everyone has given me.

I’ve enjoyed the friendships I have made along this journey. And a journey it is! I look forward to connecting more with you, my dear friends and hopefully have more for you in the near future.

When I decided to create a webpage and wanted the domain for just my first and last name, but there was another author with the same name.  Even though it had been a while since she published, the genre was too close, and I didn’t want there to be any confusion.  I also found out that particular domain was taken by a health fitness person.

So, I had a decision to make

My middle name actually starts with a C, but I didn’t like two C’s next to each other in my author name, so I decided to go with M – which is the first letter in my maiden name.

When someone types in Denise M. Colby; my website, blog posts and social media appears in the search, which means I’ve done something right in being consistent with using that name.  When I typed in Denise Colby, I did not appear in anything, also because of the above statement.

I wondered, then, how difficult would it be to have something appear in a search using only Denise Colby.  To do so, would mean I would need to use Denise Colby in the alt text of photos, as well as in a post (did you know the internet indexes even the headers you choose? I’m covering that in a separate post).

So to test this theory, I decided to write a post using some specific SEO techniques.

I uploaded the same photo with different file names.  It turns out that the file name cannot change when you upload it and that name becomes public record – even if you change the title later.  (I’m still trying to figure out what the title line is for, then).

I also filled out the Caption and the Description on each photo as I’ve read that those sections can be indexed as well.  I added more text to the captions within this post, but it doesn’t back feed into the media files.  Not sure yet if that makes a difference or not.

Recently I read using the built-in subheads (Heading 1, Heading 2, etc.) gets indexed into metadata as well, so I wanted to test that theory in this post.  That is why I have the words Denise Colby in the first subhead above. And why I’m writing this line next:

I decided to use Denise M. Colby instead of Denise Colby

I’m going to resist creating an image header for this post, although I believe if I added one using the file names and alt text with the same data would help with what I’m trying to test.  I might add another post similar to this one later on just to learn more.

So, thanks for following my ramblings as I test out my own theory and knowledge related to SEO techniques and website posts.  And now you know why I use the M. in my name.

When visiting a friends cabin and they have a book

Merry Christmas 🎄🎁 from my family to yours

Adding a little Christmas cheer when I work at my

So much to be thankful for. Great day to count ble

When you purchase a backdrop that includes books f

Nothing like curling up with some hot tea at the e

I found a whole section of verses on #myword2022 #

Ephesians 2:10; we are his workmanship, created in

Yes that’s me, channeling my heroine Olivia at t

Love this new series by Susan May Warren. I devour

I devoured these books so quickly! One of my favor

Love this new mug from my sister! Something to rem

I couldn’t resist taking a pic with this giant r

You know you are a book nerd when your doctors off