Another year, another beginning.  I love to be able to reflect on the previous year and see all that occurred over the last 12 months.  Parts were bumpy and other parts inspiring.  In my writing I had many ups and dow 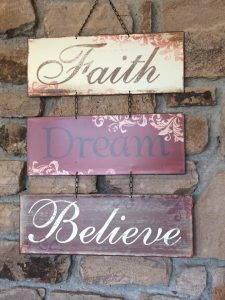 ns, wondering if the fruit of all my labor would really be anything worthwhile.  When I chose the word BELIEVE for my word of the year in 2016, I had no idea how applicable it would be.

I found the word everywhere.  At the gym.  In a quote on the wall at the doctors.  On a t-shirt.  On a charm holder which I had to buy and now holds my keys within my purse.  Every time I saw it, I was reminded of two things.  I believe in God and His Word.  To keep believing in my writing. 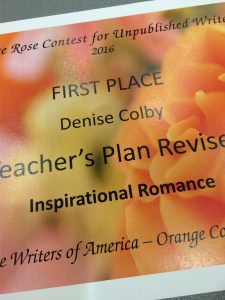 r of RWA.  The first year I received such valuable feedback that I wanted to enter again to see if the changes I made would be received any better.  I was so surprised when it was announced that I won 1st place in my category!  First place!  Me!  And it was then that my word took on a completely different meaning – someone else believed in my writing too.

That gave me the shot in the arm I needed to keep editing, keep rewriting and moving to the next step.

As 2016 turned into 2017, I had some new goals for the year.  Never thought I would accomplish them all in January, but I did.

In the RWA world, turning PRO is one of the steps in getting closer to being a published author.  You have to upload your entire manuscript for proof of your writing and then they review it and approve it.  When I completed my first round of full edits, I sent it in and was so excited when I got the email telling me ‘it passed’.  I also decided to enter the national contest for unpublished authors – the Golden Heart.  Even if I do not final, actually sending it in was a huge milestone for me and already helps me push ahead for more this year.

I have a new word for 2017 and I will write about that in a different blog post.  But let’s just say I am super on fire for what can happen in 2017.  Stay tuned as I will hopefully have more news to share throughout the year.

Would love to hear your thoughts.... Cancel reply

A pep talk to myself: There may be obstacles. Ther

Being the journal nut that I am, I love finding di

Online zoom writing meeting this am. Who would’v

Having a hard time picking just one verse to repre

It’s not a glamorous word, but it’s mine for 2

Happy Halloween 👻🎃🏚 I love this shirt I f

I’ve been studying the word #wisdom all year lon

In keeping with tradition (making my boys cakes ev